After 2015, Booth Constructions to Steal the Show Again at Paris Airshow 2017

Berlin, September 26, 2016: The world of trade shows is booming at an expedited rate, and so is BoothConstructions.com experience in designing and building flawless trade show stands. In a decade of experience in the exhibition industry, BoothConstructions.com has developed a potential forte in the aviation and defense cluster. The leading exhibit house successfully fabricated a custom built stand for the U.S Department of Defense at the largest and the longest air show, Paris Air show 2015.

Snippet of the stand designed 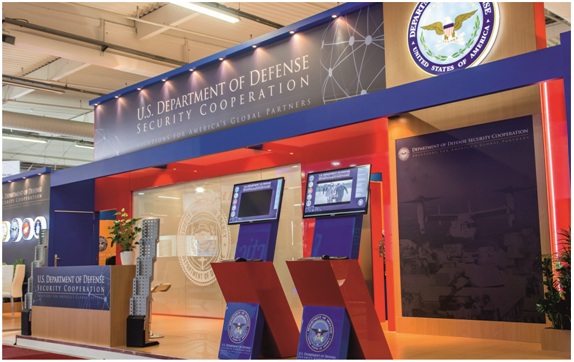 With a keen sense of aesthetics, the painstaking team of BoothConstructions.com conceptualized a custom built stand for U.S. Department of Defense, spanning on an area of 13500mm by 6500mm. The bespoke stand masked the brand color scheme; indigo mingled with red, a color for energy, power, and passion.

As per the requirements of the clients, the stand facilitated:

• An open sitting area with a sitting of four people.
• Three enclosed meeting rooms for discussions with potential clients.
• An information counter

The essence of the brand was seamlessly incorporated with various promotional graphics on the panels of the booth. With audio-visual displays at the edge of the stand, one could have a view of the innovations of Department of Defense in a digital format, making it optically interactive.

After winning the triumphant at Paris Airshow 2015, the leaders of the European exhibition industry, BoothConstructions.com is locked and loaded to mark their existence at Paris Airshow 2017, scheduled from June 23 until June 25. The exhibit house has reached the pinnacle of designing and building impeccable booths with complete detailing. With their experience in the aerospace and defense realm, they help an exhibitor maximize his returns on investment.

Berlin, 18 October 2016: The leaders in the European Exhibition Industry, BoothConstructions.com are geared up to…

Exhibit in Abu Dhabi with the Experts

Are you willing to exhibit in Abu Dhabi? Trust Booth Constructions, the experts of exhibitions in…